Anna and Vaughan Arnell discuss the creation of Corky the dog

Corky is the star of this Christmas's Dogs Trust campaign. Initially created by a 12-year-old Anna Arnell - and now directed by her husband - here, the duo explain how he came to be at the centre of an important message.

Dogs Trust released their Christmas campaign yesterday and it stars Corky the dog, a canine creation dreamt up by And Rising Executive Creative Director Anna Arnell when she was 12-years-old.

The campaign, which has been helmed by Moxie Pictures director - and Anna's husband - Vaughan Arnell, is the emotional tale that reminds us that dogs are for life, not just for Christmas. Below, Anna and Vaughan explain the genesis of Corky's creation, why it made sense to use him for this campaign, and the sometimes tricky nature of shooting with a puppet.

There’s something about the way we pop loads of corks and then just chuck them away that made me think of that little puppet.

This campaign is based on an idea you had when you were 12-years-old, Anna; can you explain the roots of how it came to be the concept for this year's Dogs Trust campaign?

AA: In Year 8 we had to make a puppet for drama homework. I desperately tried to make a dog out of cork and string but it was a mess. So, a family friend who was a jewellery maker came on board to help create Corky (full name Corkchop). Most of the other kids made sock bunnies but I out-sourced my production, which was maybe cheating.

Then, two years ago, the Corky Christmas story came about after I read a news story about the huge volume of prosecco and Champagne sold at Christmas in the UK. There’s something about the way we pop loads of corks and then just chuck them away that made me think of that little puppet. The Dogs Trust had just given us an incredibly important brief and I wondered if there was an idea there.

When you’re a kid, ideas sort of appear out of dust.

Is it an idea you've had in the bottom drawer for some time? 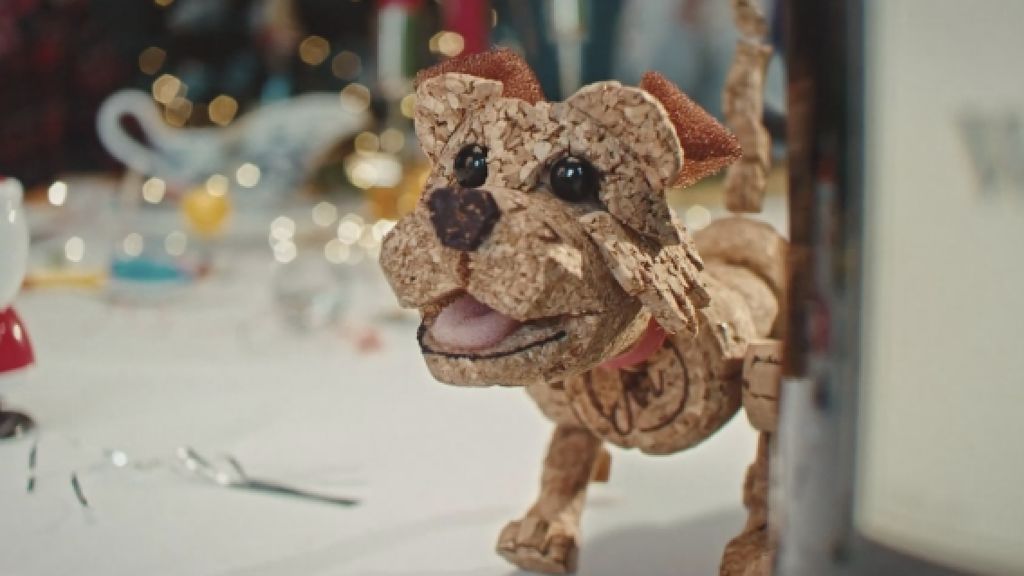 Can you remember where the initial inspiration for the idea came from for the 12-year-old you and what you hoped to do with it at the time?

AA: When you’re a kid, ideas sort of appear out of dust. I was constantly drawing, doodling, and writing stories and Corky was just one of the ones who made it into the real world. I had no particular hopes and dreams for Corky because I didn’t think that way. I just used to create for the fun of creating. There was no endgame. And no social media so couldn’t even do it for likes.

As an adult I look to artists, music videos, films, writers... It was great to look to younger me for inspiration this time.

Twelve-year-old me wouldn’t have been able to comprehend that Corky would star in a Dogs Trust Christmas ad with one of the biggest pop stars in the world singing the vocals and carrying such an important message. As an adult I look to artists, music videos, films, writers, photographers and everywhere in between to spark ideas. It was great to look to younger me for inspiration this time. 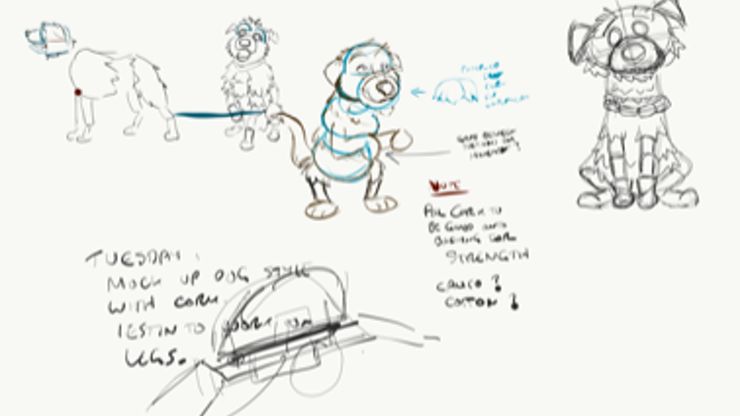 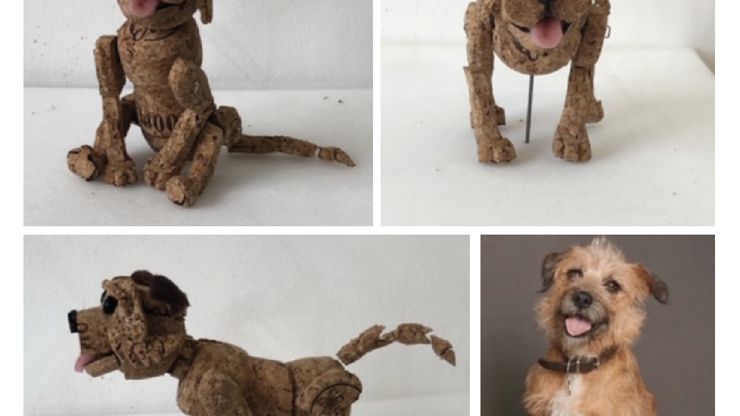 Above: Initial designs and drawings for Corky.

Vaughan, have you worked with puppets before and, from there, can you explain why you chose this method and what the challenges are when using it?

VA: I’ve not worked with puppets before, so this was a new challenge. But it was such a great story I just wanted to bring that emotion out. Initially we thought a marionette would work, but when we spoke to Andy [Heath, Co-Founder] at Talk to the Hand, he suggested the rod puppet system to really bring the character to life.

It was brilliant to watch the puppeteers work together to bring to life this tiny dog.

In some shots we had four rods in Corky and three puppeteers in green suits. There was a mechanism to control his mouth, he had different legs and eyes we could swap in depending on Corky’s mood. It was brilliant to watch the puppeteers work together to bring to life this tiny dog.

What's that process like and why was it the best approach for this film?

VA: 95% of what you see on screen was captured in camera. We wanted the film to have real heart and soul to it with the table as a Christmas playground for Corky. I talked to Anna about Tom and Jerry cartoons, never seeing the faces of humans, and really getting drawn into Corky’s world. So, we shot with a borescope lens which is about a metre long. It allows you to get up close to a subject and keep it all in focus. You feel like you’re in with the character on their level.

It was important you had this connection with Corky, so when he’s swept into the box you really feel that heart-wrench more. And, despite being a puppet, he does feel like a real dog. Ben [Robards] and the team at Absolute did an incredible job on the post. There were puppeteers, rods, and all sorts to work around. And, of course, the music was important. Corky’s story was beautifully complimented with Sam Smith’s incredible vocal and some wonderful sound design from Factory. 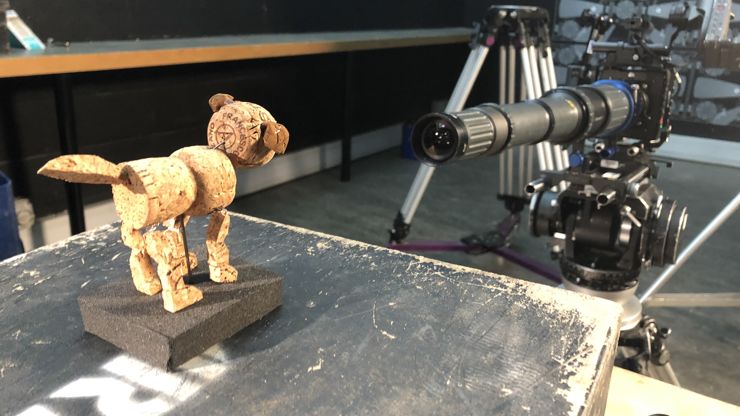 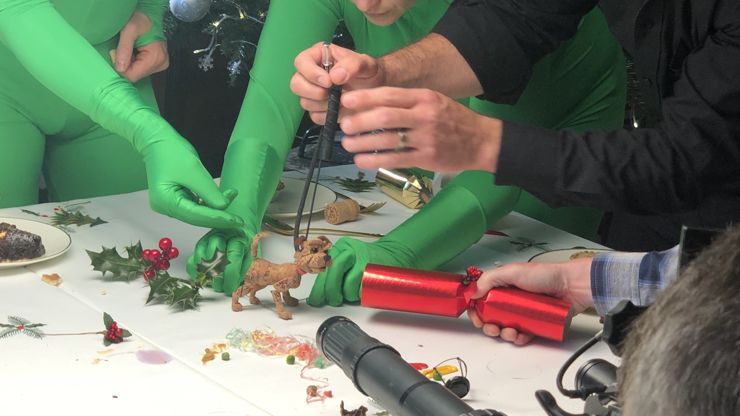 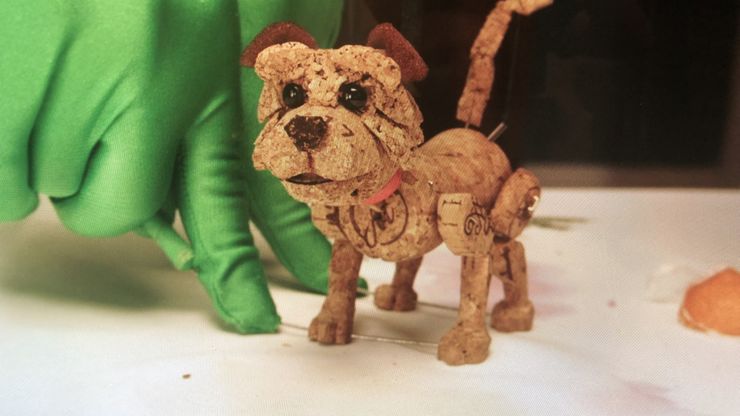 Above: Behind the scenes on the Dogs Trust shoot.

You've worked together in the past - both pre- and post-marriage; what's it like working together when you're a married couple?

AA: I love working with Vaughan as he throws his whole heart into every production. Directors I’ve worked with before know I like to stay super-close to every detail of the job. I’m not one of those creatives who can just sit back and sip the flat whites, I like to be up on set in the thick of the action.

When you’re working with your wife you have to do as you’re told!

Given the importance of the job, I knew the number one person I could trust it with was Vaughan Arnell. He’s got this way of inspiring everyone he works with and it always shows on camera. All the best work is as personal as it is professional.

VA: Well, firstly, when you’re working with your wife you have to do as you’re told! But secondly, it was like bringing two families together. My whole crew family with Anna’s And Rising family. It felt like a really good collaboration and the thing about any great job is it should always be enjoyable. It’s like when you do a really great music video, everyone excels, everyone brings their best to the table and I think everybody did with Corky.

During the run up to Christmas, online searches for puppies increase by 44%.

In the UK, 'a dog is for life, not just for Christmas' is a famous line, but is it hard to breathe new life into a message that's so well known?

AA: It’s an iconic line, but far fewer know that it belongs to the Dogs Trust. So, yes, there was a lot to live up to. We tried to focus on telling the most emotional story we could. During the run up to Christmas, online searches for puppies increase by 44%, so it’s still a message that needs to be shared. I feel lucky to have a client who trusted us with such an important task. 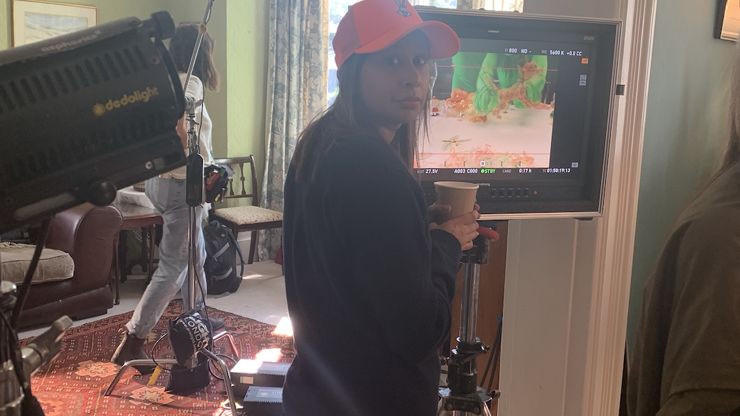 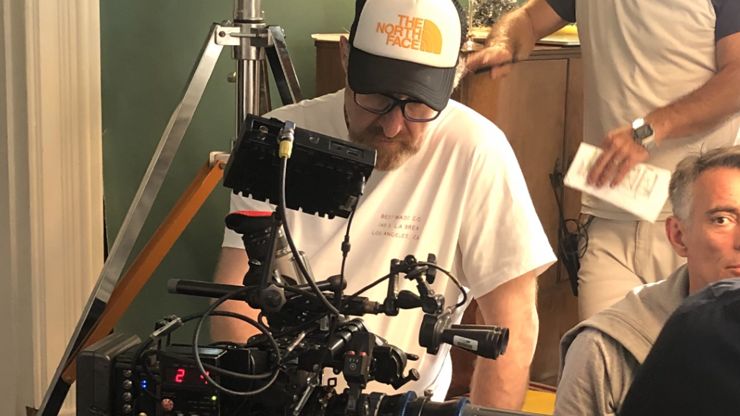 Do you own a dog yourself and, if so, does that help focus the mind for this client?

AA: We do, he’s called Moose. A lot of the table-top action was through observation; the gravy scene is definitely Moose! Understanding how dogs relate to the world, and to people, is absolutely critical. There could be no doubting any element of Corky’s performance. We had dog behaviouralists both on set and in the edit.

VA: There’s a lot of Moose’s character in Corky. That inquisitive, mischievous personality that many dogs have. We insisted on always having a dog in the room for every production meeting. Moose was with us editing at Final Cut, stealing tissues out of the bins. But Mabel, the hero of the ad, was on best behaviour on the shoot days.

We insisted on always having a dog in the room for every production meeting.

What was the most challenging thing for each of you on this project?

AA: The hardest thing was getting Corky the puppet's character and performance right. We spent a long time developing the character with Andy. Too big eyes and he’s scary, too much fur and he looks over-designed. Then when we got to set we had all sorts of challenges, like the mouth mechanism broke, so the shoot was delayed.

VA: The hardest thing for me was not letting Anna down as it came from such a pure thought when she was 12.

We spent a long time developing the character with Andy. Too big eyes and he’s scary, too much fur and he looks over-designed.

VA: Hopefully being able to prevent other dogs from being abandoned this Christmas. 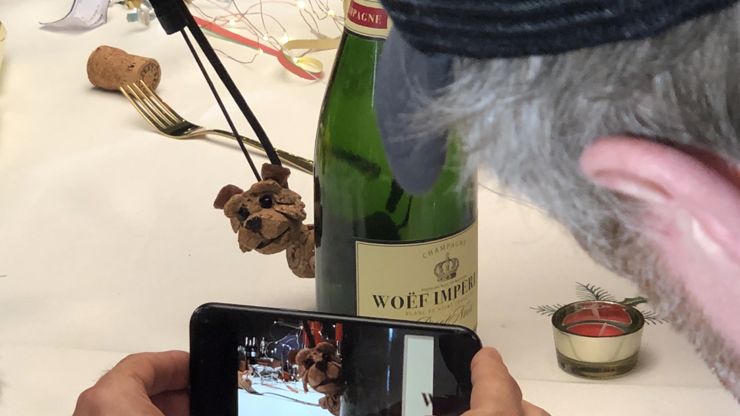 How to make a big deal out of small businesses

Last Friday, Channel 4 and a host of big brands donated an entire ad break to mini-spots highlighting small businesses throughout the UK. We caught up with Armoury MD & Senior Producer Matt Hichens and Creative Director Jack Laurance to find out just how they shot six companies in six days with six directors, all under strict safety guidelines.

How to sober up a Drunken Master

Suthon Petchsuwan, Mum Films director and helmer of the hilarious new Jackie Chan-spoofing film for the Thai Health Promotion Foundation, talks to us about shooting an action epic under strict pandemic guidelines and finding the chuckles in the surreal.

The naked truth behind the Stones' latest promo

Photographer and filmmaker Diana Kunst recently released a new video for an old Rolling Stones track which charts the relationship with her friend, Marina. The video was accused by some of being 'lecherous'. Here, Kunst explains how the video came to be and what its real message is.

Johnny Hardstaff on his Small Film with a big impact

After taking up residence for eight days at a UK hospital treating Covid-19 patients at the height of the pandemic, Johnny Hardstaff has created a stripped back, emotional and compelling film with just a stills camera and a voice recorder. Here, he explains the thinking behind his Small Film. 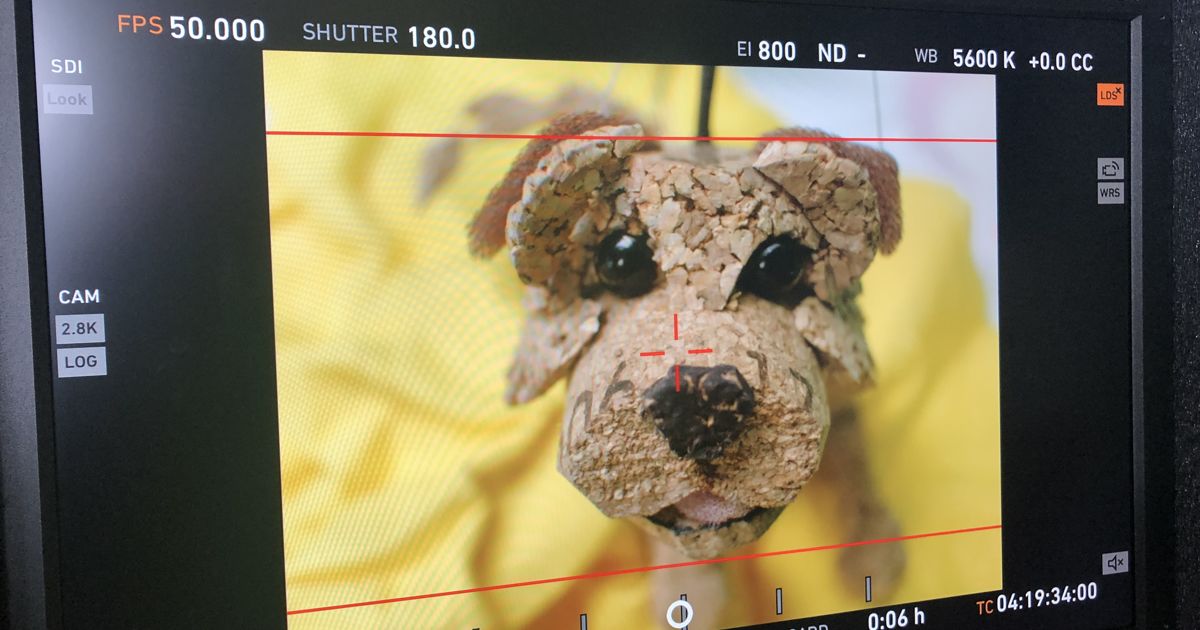 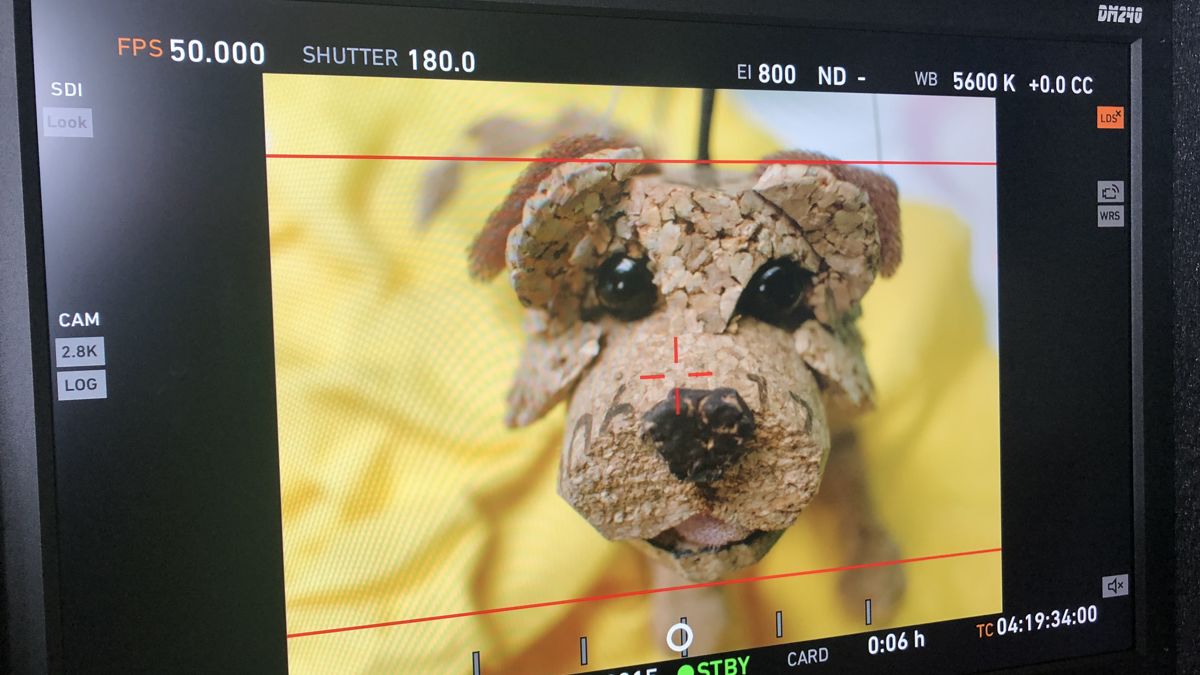