There’s a lot to celebrate about our industry at the moment.

We’re in the middle of what’s arguably a golden era of filmmaking and the quality and quantity of content has never been better, it’s more diverse and almost every sector is booming. Not bad given we’ve been in a global pandemic for the last 18 months.

Now is the time to act and try to reset many of our bad habits.

In fact, while the pandemic rages on, our industry has rebounded even stronger and is firmly back on its pre 2020 growth trajectory. In these difficult times advertising has shown how resilient and adaptable it can be, from remote shooting to safeguarding crews, it’s been one of the success stories to emerge out of the pandemic and it’s exactly these qualities that will be required for its next, bigger challenge; the climate crisis. Above: With pandemic restrictions lifted in many places, will flying - and therefore emissions - start to increase?

Now is the time to act and try to reset many of our bad habits. There’s plenty of data to prove exactly what a resource intensive and wasteful business advertising is, and thanks to many excellent organisations, like AdGreen and Greenshoot, there are resources and systems in place that can assist you in transitioning to more sustainable ways of working. I know it’s easier said than done, and most of us are just grateful to be working again, but it sometimes feels like very little has changed on this front. In fact, it’s slightly worrying that probably the highest percentage of enquiries I receive about shooting on our virtual stage are cost driven rather than for sustainability.

We all know transport is the largest slice on the carbon pie chart so it’s hardly surprising that, as an industry, our carbon emissions are going in the wrong direction.

It’s usually a straightforward equation; are you cheaper than shooting in (insert Eastern European production hub)? We all know transport is the largest slice on the carbon pie chart so it’s hardly surprising that, as an industry, our carbon emissions are going in the wrong direction. There’s a record number of shoots now being produced in far flung, previously unheard of production ‘hubs’, where crew, equipment and just about everything is cheaper and there’s far less scrutiny of production practices.

To emphasise this point, we thought it would be an interesting exercise to do a carbon comparison for the same film shot, first, on location, and then shot on a virtual production stage. Now, at the outset I need to caveat a few things. Firstly, we didn’t do two identical shoots, that really would be frivolous! We shot the film on our virtual stage, at Garden Studios in London, and then worked out a hypothetical location shoot scenario where we estimated the number of days/crew/props etc, which was then verified by independent producers. We used the Albert/AdGreen Carbon Calculator, which was all certified by them and, as with all our shoots, all the emissions were offset. 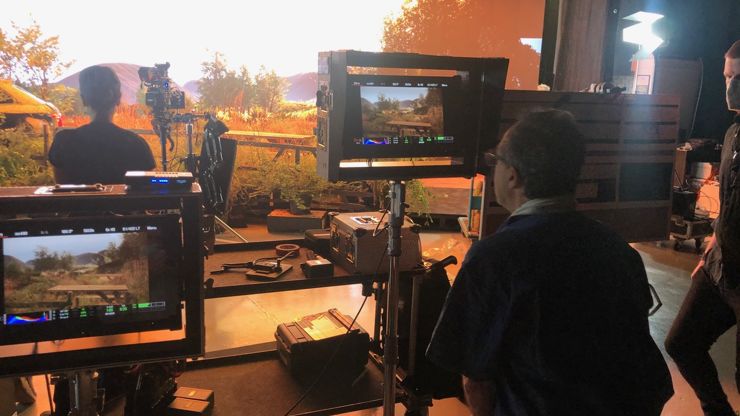 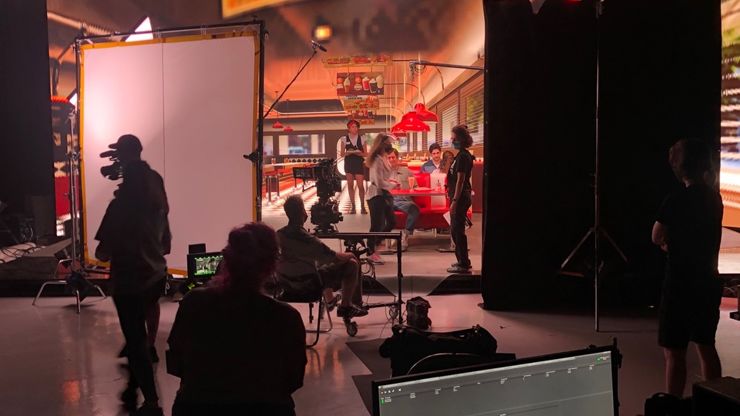 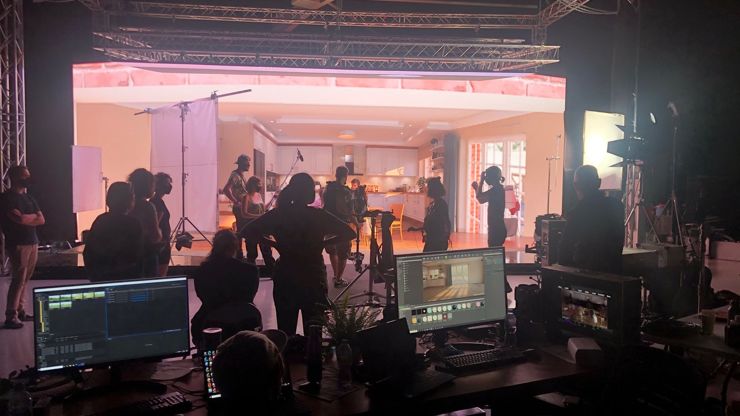 Above: Images from the virtual shoot arranged for the carbon comparison experiment.

In total we shot 10 interior and exterior scenes, ranging from an office and a home to a futuristic street scene and a creepy graveyard. On our virtual stage this took two days to shoot using CG backgrounds, mostly sourced from stock. We estimated that the equivalent location shoot would have taken five days, including one overseas shoot day. We had to make a few assumptions, including the energy usage on each of the location units but, if anything, we were very conservative with these numbers.

In contrast, our figures for the virtual shoot were very accurate. Not only is it relatively simple to measure our consumption on a virtual stage, but the LED volumes we use are incredibly energy efficient and these can provide up to 90% of the lighting required on any given scene. All our energy comes from green sources and all our props were recycled from local prop houses.

I know less crew are travelling these days, but will this continue if/when the pandemic eases and we can move around freely again?

So, it wasn’t that surprising to see the difference – the virtual shoot created less than 1% of the CO2 created by the location shoot; 0.74 tonnes compared to 94.82. That’s nearly 130 less carbon produced. I’m not going to argue this comparison was an exact science, but it certainly highlights a big challenge if we are going to tackle the carbon problem in our industry. Not surprisingly transport and travel were by far the main offenders, accounting for over 90% of the location shoot emissions compared to less than 25%. Above: The state of the world's environment is in the balance.

I know less crew are travelling these days, but will this continue if/when the pandemic eases and we can move around freely again (no one I know enjoys remote shooting)? There are many valid reasons for shooting abroad but many productions are simply doing this for budgetary reasons. Yes, it’s cheaper financially, but at what other cost? Would we have this rush for the departure gates if the stakeholders had to sign off on offsetting carbon estimates? Broadcasters mandate this in television so why shouldn’t brands and even agencies do this for advertising?

Ad Net Zero is a great step in the right direction but could we go further and do it faster, before we completely reset to how it was before the pandemic?

While decisions are purely based on a financial bottom line, little will change. The wider ‘cost’ of production must be measured and taken into consideration if we’re going to start getting our house in order.

Initiatives like the Ad Net Zero are a great step in the right direction but could we go further and do it faster, before we completely reset to how it was before the pandemic? The last 18 months have shown how adaptable and resilient our industry is so surely there’s no better time to act, and there’s certainly no time to waste.

Production has changed, and so too has client expectation. These changes have thrown up new challenges, but also new opportunities and Marloes Van Den Berg, Chief Production Officer at 180 Amsterdam, examines both, looking at the effects they have on agency production.